Stanford University made national news on mainstream media outlets last week, when the Board of Trustees announced the decision to divest the $18.7 billion endowment from coal investments. This is a story of the student activists who were called into a surprise meeting with Stanford administrators and walked out smiling and speechless.

Fossil Free Stanford, the student group behind the divestment push at Stanford since the fall of 2012, has been holding actions on the Stanford campus to raise awareness and mobilize support. (Disclosure: Diane is a volunteer for Fossil Free Stanford’s graduate student campaign). The group is part of a larger movement coordinated by 350.org to rid University campuses across the country from fossil fuel investments, due to the impacts that individual companies have on climate change. The Fossil Free Stanford story has appeared prominently in previous Green Grid Radio episodes.

Krishna (left of speaker) at a Divest Harvard rally in April 2013. Photo from firsttheretheneverywhere.org

Krishna Dasaratha participated in the Divest Harvard movement while enrolled at Harvard through 2013, then joined Fossil Free Stanford as a graduate student this year. The Divest Harvard students have faced some hurdles on their steadfast course for divestment, including the President’s “unequivocal” statement that the school did not intend to divest in late 2013, and the recent May arrest of a Divest Harvard activist.

Dasaratha notes that the big difference between the Stanford and Harvard campaigns has been that Stanford’s Board of Trustees is held to investment responsibility, and have therefore been more receptive to discussions with the students who have been arguing that climate change causes “substantial social injury.” And in Spring 2013, The Leland Stanford Junior University Board of Trustees accelerated the time horizon of their decision to divest from coal. 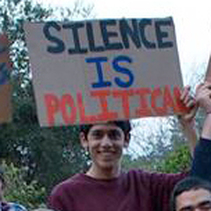 Orton and Propp describe how they have worked on developing a climate change education curriculum in local high schools. Harrison, who leads the Fossil Free Stanford movement, talks about the campaign to encourage the Board of Trustees to divest from fossil fuel investments. Our discussion also touches upon how climate change needs to be communicated in a less “doomsday”-like context, and instead framed in a way that highlights the positive results of a sustainable lifestyle (rather than a life of deprivation).  As always the episode features the most recent news on energy and environmental issues.